The Golden Bough: A Study in Magic and Religion is an essay written  by the Scottish anthropologist Sir James George Frazer at the end of the XIX century.

Given that we are in the most magic period of the year and I am in my “fantasy” mood I decided to read again some part of this very interesting (yet a bit confusing) essay, to try to understand the origins of “Yule log”

Here some excerpts that may enlighten the importance on the log during the celebration of the Winter solstice.

“… The custom of kindling great bonfires, leaping over them, and driving cattle through or round them would seem to have been practically universal throughout Europe, and the same may be said of the processions or races with blazing torches round fields, orchards, pastures, or cattle-stalls. Less widespread are the customs of hurling lighted discs into the air and trundling a burning wheel down hill. The ceremonial of the Yule log is distinguished from that of the other fire-festivals by the privacy and domesticity which characterises it; but this distinction may well be due simply to the rough weather of midwinter, which is apt not only to render a public assembly in the open air disagreeable, but also at any moment to defeat the object of the assembly by extinguishing the all-important fire under a downpour of rain or a fall of snow.”

“… But we naturally ask, how did it come about that benefits so great and manifold were supposed to be attained by means so simple? In what way did people imagine that they could procure so many goods or avoid so many ills by the application of fire and smoke, of embers and ashes? Two different explanations of the fire-festivals have been given by modern enquirers. On the one hand it has been held that they are sun-charms or magical ceremonies intended, on the principle of imitative magic, to ensure a needful supply of sunshine for men, animals, and plants by kindling fires which mimic on earth the great source of light and heat in the sky. This was the view of Wilhelm Mannhardt. It may be called the solar theory. On the other hand it has been maintained that the ceremonial fires have no necessary reference to the sun but are simply purificatory in intention, being designed to burn up and destroy all harmful influences, whether these are conceived in a personal form as witches, demons, and monsters, or in an impersonal form as a sort of pervading taint or corruption of the air” 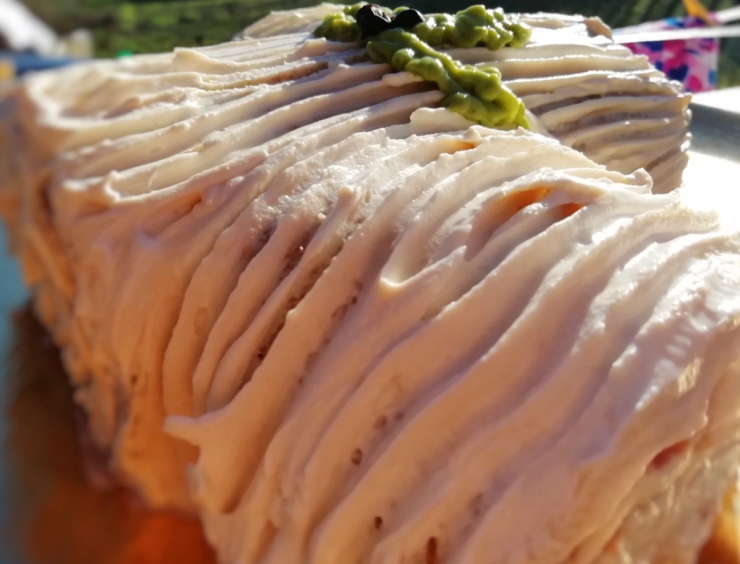 It is indeed a very interesting book, it helps us to understand the origins of our believes and traditions. Speaking of traditions, in many European countries we find a cake made in the shape of a log: the Christmas Log in the anglophone world, Buche de Noel in France and Tronchetto di Natale in Italy.

I decide to break the tradition and prepare a Savoury Christmas Log with shrimps and smoked salmon, nice on a buffet as well as an entree.

200 gr. shrimps (boiled and without shell)