“Beware that, when fighting monsters, you yourself do not become a monster… for when you gaze long into the abyss. The abyss gazes also into you.”― Friedrich Nietzsche

This could be the motto of Kurt Wallander, the best seller Swedish detective created by Henning Mankel in the early ’90 and soon became a world best seller. In each of the twelve novels Mankel published in the Wallander series, he tried to enlighten the contradictions inside men and between men and society. I am a real fan of Kurt Wallander, he helped me to understand the contradictions of a society that is apparently perfect like the Swedish one (to be honest, living there I came to understand that Swedish society may not be perfect but it is nearly there). Wallander is not a gourmet as other detectives like my Montalbano, he is easy to please, very often we find him in Fridolfs Konditori to buy Swedish Cinnamon rolls. Fridolfs Konditori actually is in Ystad city center and I can assure that they prepare not only lovely cinnamon buns but also wonderful smorgasbord, the Swedish sandwiches.

So thinking of Kurt Wallander I prepared cinnamon buns but I rolled them in the way Cardamom buns (another Swedish specialty) are usually rolled. 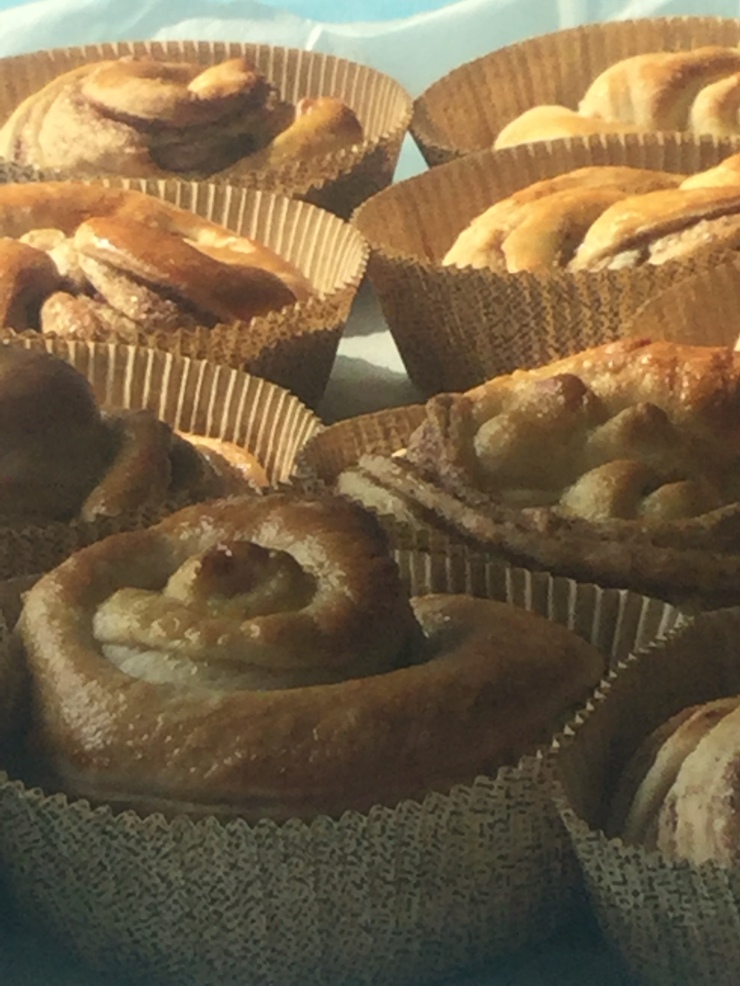 Stir the yeast in a few tablespoons of milk.

Melt the butter put in the bowl of a stand mixer and pour the milk on it. Add the rest of the ingredients and knead the dough for 10–15 minutes.

Let the dough rise while covered at room temperature until it double.

Divide in small part of about 50 gr. each and let it rise again for half an hour.

Roll out each piece of dough so it is about 3 mm.

Prepare a mixture with cinnamon, butter and sugar and spread each rolled piece with it. Roll the dough the long way and cut the roll in the middle and then roll around itself (follow the slide show). Place them with the cut edge upward in paper molds. Place on a baking sheet and let rise under a towel for about 60 minutes or until the buns have doubled in size.

Beat the egg, brush the mixture carefully on the buns. Bake in the oven (200°C) for 20 minutes. Allow to cool on a rack.