I have decided to challenge myself until the summer, I will prepare food from Jane Austen’s table. I got ready, I have good companions, I found London Art of Cookery by John Farley in an edition of 1811 and the Lady’s own cookery book, by Lady Charlotte Campbell Bury published in 1844, but Lady Charlotte was born in 1775, the same year of Jane Austen so I think that the recipes she describes are similar to the food Jane was eating every day (yes because Lady Charlotte specify that her book is “adapted to the use of persons living in the highest style, as well as those of moderate fortune”.

I decided that first of all I need to learn how to make good muffins for a nice cup of tea.

“With such rivals for the notice of the fair, as Mr. Wickham and the officers, Mr. Collins seemed likely to sink into insignificance; to the young ladies he certainly was nothing; but he had still at intervals a kind listener in Mrs. Philips, and was, by her watchfulness, most abundantly supplied with coffee and muffin.”

And in Hartfield, with too much generously, according Emma’s father:

“No, my dear,” said her father instantly; “that I am sure you are not. There is nobody half so attentive and civil as you are. If any thing, you are too attentive. The muffin last night—if it had been handed round once, I think it would have been enough.”

First I tried the recipe I found in Farley’s book, the original was saying “a pint and half of good ale yeast… Two gallons of water just milk-warm but not so hot as to scald the yeast, and two ounces of salt… and with a bushel of Hertfordshire white flour mix”.

The first challenge is that I don’t have ale yeast, and to tell the true, I am not so passionate on the idea of preparing it myself, so I went for dried yeast (1 tablespoon) and I sparkled it in about 50 ml of warm sugared water. I left it to rest until bubbling. I did the math, two gallons of water and a bushel of flour is enough muffins for an army, not for a family of four. Proportions are 1 to 5 so I prepared a dough with 5 cups of flour and 1 cup of milk-warm water (35 C.) and the yeast. A tablespoon of salt was added in the flour. The dough was very dry and hard so I let the mixer go at low speed until it was softened, it takes a very long time. I let the dough sit in a warm place until doubled in size, I knocked back and rolled it about ½ cm thin on a floured surface, then with a round biscuit cutter I cut the muffins and I let them  sit in a warm place until doubled. Instead of a griddle I used an oven pan, I put it in the lower place in the oven, heat it and the I placed my muffins.  I turned the muffins after about 7 minutes to grill the other surface.

I didn’t like the result. They are eatable, like bread, but they are not fluffy at all. The dough was too dry. Maybe with a griddle I would have get a better result. 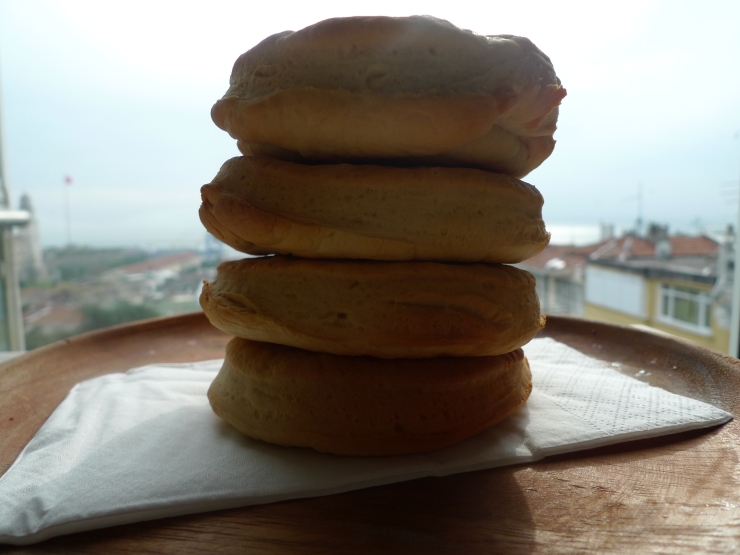 Tomorrow I am going to try Lady Charlotte recipe… I think I would get a “lady-like” result.

So don’t pop in my place for tea today, I invite you tomorrow, hoping for a better result, but in any case I have plenty of butter and homemade jam and jelly.